SYDNEY: THE FACTS BEHIND THE COMMENTARY

The Sydney property market has lead the way for price growth since January 2012, with the median house price increasing by 82% in the five years to December 2016. Over the period, the proportion of suburbs in Sydney with a median price below $600,000 declined from 44% to 11%.

Property markets move in cycles with periods of growth, followed by periods of correction and stagnation. Figure 1 charts the phases of Sydney’s housing market between 1986 and 2016. Notably absent are significant price corrections, with the largest decline being 5.5% between January 1991 and December 1992. This followed a growth phase where prices increased by 120%. 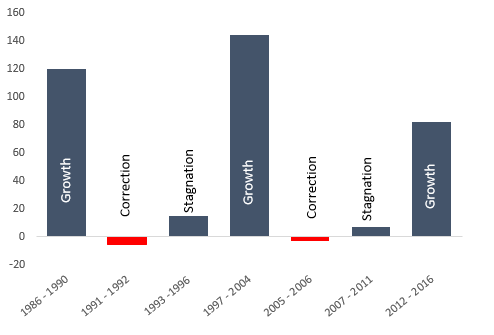 Between January 1997 and December 2004, the median house price in Sydney increased by 144%, heralding the familiar ‘bubble risk’ warnings. The International Monetary Fund was particularly bearish at the time, warning of a ‘Housing Boom to Bust’ in the Sydney Morning Herald on September 18, 2003.

The most recent growth phase (2012 – 2016), which by most measures has approached its peak, has seen Sydney house prices increase 82%; the least significant (percentage) price growth phase since 1986. As it has following the last two cycle peaks, the Sydney property market is likely headed for a period of subdued growth due to affordability constraints

As it has following the last two cycle peaks, the Sydney property market is likely headed for a subdued period due to affordability constraints. It’s a landing that’s will likely be soft given low interest rates, strong demand fundamentals, the highest Gross Domestic Product per capita of any city, falling apartment approvals and the nation’s